Post-weaning diarrhea is one of the largest sources of economic loss in swine production. It is characterized by high incidences of diarrhea and growth reduction attributable to enterotoxigenic strains of E. coli. Stressors such as early and abrupt weaning, between 17 and 28 d of age, places enormous stress, leading to perturbations in gut microbiota, host physiology, and mucosal immune function. Probably no area has received more attention in the last 5 years than mucosal immune response of the gut. The health of the mucosa epithelium, which are the cells that line the gastrointestinal tract, is important not only for the growth and development of the pig through secretion and absorption but these epithelial cells (also known as enterocytes), which are largest immune organ in the pig, are the first responder to microorganisms in the gut.

The goblet cells that are part of the mucosa secrete mucous and mucins that provide the initial barrier (Figure 1, Figure 2) (Varum et al. 2010 and Pelaseyed et al. 2014)). Mucosa epithelial cells also contribute mucins to this barrier (Maynard et al. 2012 and Chase et al. 2012). This barrier also contains antimicrobial peptides (AMP) produced by the enterocytes (Figure 2). These AMP are induced by the microbiota in the intestinal tract and also by the immune natural killer (NK) and LTi cells (Figure 2) (Chase et al. 2012). The AMP (also known as host defense peptides, HDPs) are important family of molecules that helps to form a chemical barrier to limit infection at epithelial surfaces and attack invading bacteria. In pigs >30 HDPs have been identified and characterized (Maynard et al. 2012). The AMPs are relatively small cationic peptides and are found predominantly at mucosal surfaces and in phagocytic cells. They vary in structure and anti-microbial activity and can be functionally differentiated during cellular processing. The concentration of some HDPs increases in response to inflammation or microbial infection. Secretory IgA (sIgA) is produced when dimeric IgA is secreted by the plasma cells in the lamina propria and is transported to the mucosal surface of the epithelial cell (Figure 2) (Maynard et al. 2012). Secretory IgA plays an important role in immunity at mucosal surfaces by agglutinating infectious agents, preventing attachment of infectious agents to epithelial cells, and neutralizing toxins. The inner mucous layer along with the AMP and sIgA form a “killing zone” that few pathogens or commensals have evolved strategies to penetrate (Figure 2). This “killing zone” along with the tight junctions that knits the enterocytes form a “barrier” against E. coli and other enteric pathogens.

Figure 1. Mucous and mucin barrier in the intestinal tract. The mucus is depicted in dark blue and the bacteria represented as red dots. Adapted from Pelaseyed, T., et al. (2014). Immunological Reviews, 260(1), 8–20. 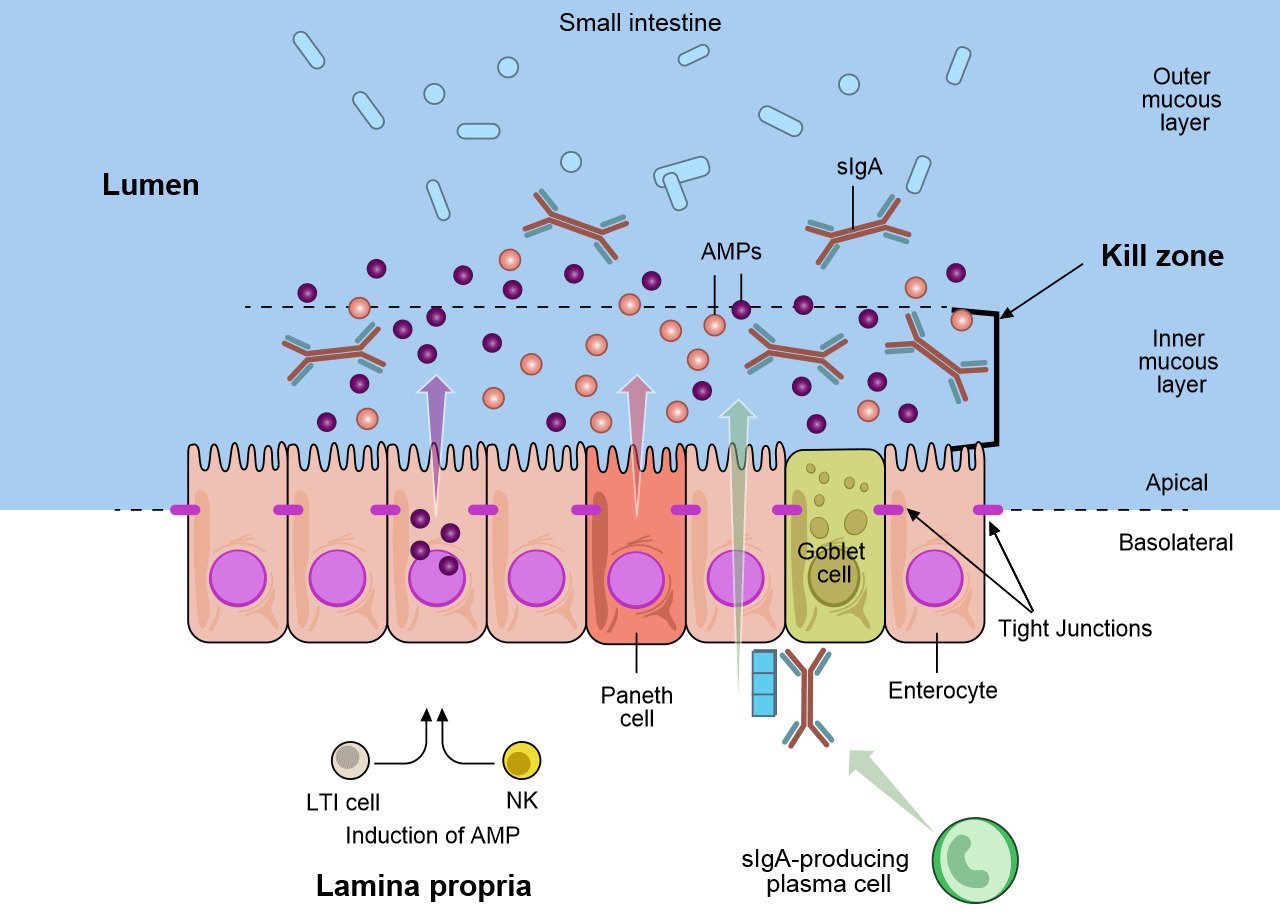 Figure 2. The mucosal defenses of the GI tract. Distinct subpopulations of intestinal epithelial cells (IECs) are integrated into a continuous, single cell layer that is divided into apical and basolateral regions by tight junctions. Enterocytes as well as specialized Paneth cells sense the microbiota to induce the production of antimicrobial peptides (AMPs). Goblet cells produce mucin, that is organized into a dense, more highly cross-linked inner proteoglycan gel that forms an adherent inner mucous layer, and a less densely cross-linked outer mucous layer. The outer layer is highly colonized by constituents of the microbiota. The inner mucous layer is largely impervious to bacterial colonization or penetration due to its high concentration of bactericidal AMPs, as well as commensals specific secretory IgA (sIgA), which is moved from their basolateral surface, where it is bound by the receptor, to the inner mucous layer. Responding to the microbiota, innate lymphoid cells, lymphoid tissue inducer cell (LTi) and natural killer cells (NK), produce cytokines, which stimulates AMP production and maintains the epithelial barrier. Adapted from Maynard et al., Nature 489, 231–241 2012

Other components of the immune response may also be important in protection against various types of infection at mucosal surfaces. Neutrophils in the pig can migrate into the intestinal lumen in large numbers in response to antigen-antibody complexes and kill E. coli. The immigration of neutrophils into the lumen of the gut and their subsequent destruction results in an increased concentration of lactoferrin, lysozyme, and cationic proteins. These substances may also contribute to immunity to bacterial infections in the gut (Maynard et al. 2012). 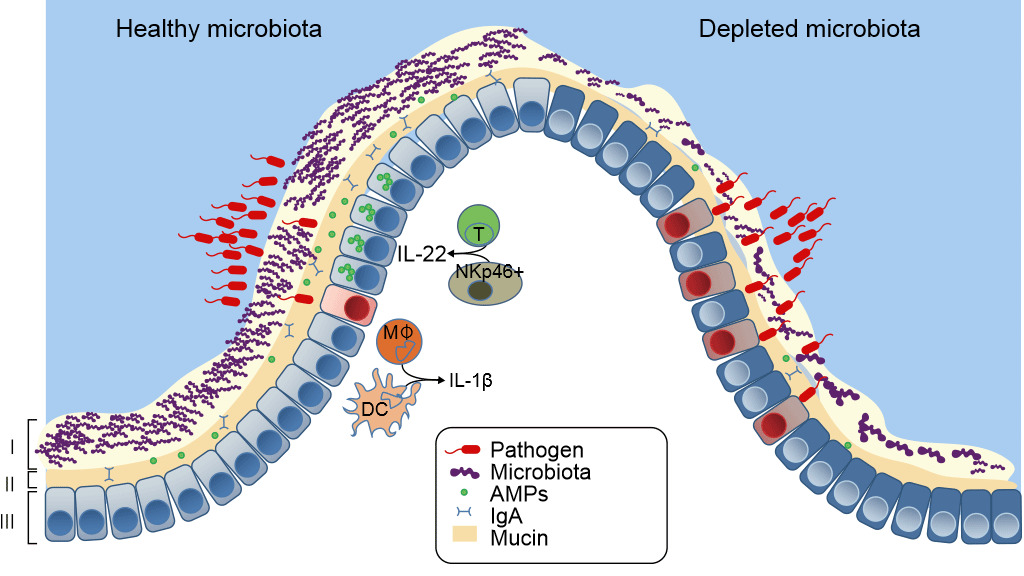 Figure 3. Healthy mucosal defenses and mucosal dysbiosis. The intestinal microbiota promotes three levels of protection against enteric infection. (I) Saturation of colonization sites and competition for nutrients by the microbiota limit pathogen association with host tissue. (II) Kill Zone- Commensal microbes prime barrier immunity by driving expression of mucin, immunoglobulin A (IgA) and antimicrobial peptides (AMPs) that further prevents pathogen contact with host mucosa. (III) Finally, the microbiota enhances immune responses to invading pathogens. This is achieved by promoting IL-22 expression by T cells and NK cells, which increases epithelial resistance against infection, as well as priming secretion of IL-1b by intestinal monocytes (MK) and dendritic cells (DCs), which promotes recruitment of inflammatory cells into the site of infection. In conditions in which the microbiota is absent there is reduced competition, barrier resistance and immune defense against pathogen invasion. Khosravi and Mazmanian, Current Opinion in Microbiology 2013, 16:221–22

The stress of being removed from the sow, age at weaning, mixing into a new environment, and abruptly withdrawn from the sow’s milk results in the gut microbial ecosystem and lowered defenses against pathogen entry, lead to increased risk of disease, in particular, post-weaning diarrhea (Fouhse et al. 2016). Post-weaning diarrhea is characterized by reductions in healthy commensal bacteria, i.e. Lactobacillus spp, and increases in pathogenic E. coli (Fouhse et al. 2016). This leads to dysbiosis- the loss of good bacteria with an overgrowth of harmful organisms like E. coli (Fouhse et al. 2016 and Khosravi et al. 2013) (Figure 3). However, dysbiosis is not just the loss of microbiota, it results in depletion of the “killing zone”- the mucous layer becomes thinner and the amount of sIgA and AMP declines precipitously to allow the barrier to become weakened, allowing pathogenic enterotoxigenic E. coli to come in contact with mucosa and cause disease. One major factor leading to the dysbiosis and post-weaning diarrhea is low feed and water intake (Fouhse et al. 2016). Post weaning anorexia and dehydration leads to structural changes to the intestine, including villus atrophy and crypt hyperplasia, which further lead to gut barrier dysfunction (McLamb et al. 2013). Early weaning < 20 days of age results in an impaired innate immune response with lower numbers of neutrophils and inflammatory cytokines that are necessary to control post weaning E. coli infections (McLamb et al. 2013). To take things from bad to worse, the reduction of lactic acid-producing bacteria (Lactobacillus) during weaning raises intestinal pH, increasing disease susceptibility because low gut pH is bactericidal to E. coli (Fouhse et al. 2016). Applied research in weaning pigs at increasing symbiotic microbes and decreasing opportunistic pathogens is aimed at minimizing dysbiosis.