Introduction
The purpose of a ventilation system is to remove excessive moisture and heat produced by animals in order to maintain an indoor climate within certain limits. Animals also produce carbon dioxide generated from metabolism. However, when the ventilation system is designed for controlling temperature and humidity carbon dioxide concentration is normally kept below the recommended maximum level of 3000 ppm. Yet, there are exceptions such as the first week after introduction of newly weaned pigs to a hot nursery. Under these conditions CO2 concentration might be much higher, which means that a higher ventilation rate is required.

Figure 1. Partition of total heat loss from pigs via latent and sensible avenues.

The winter design temperature is used as design criteria for building insulation and for calculation of building and ventilation heat loss during winter. If the sum of the two heat losses exceeds animal heat production – artificial heat must be added. The winter ventilation rate is designed for maintaining relative humidity below 70 percent. At this rate air quality is acceptable, heat loss is minimized while building quality is maintained. 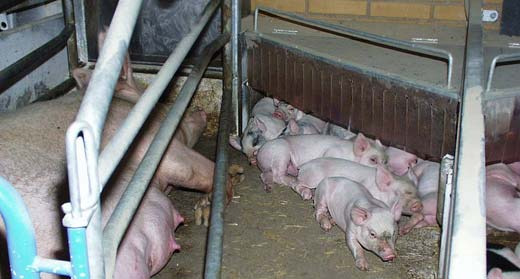 Animal heat production and temperature requirement vary with stage of reproduction, feed intake and environmental condition. Thus, finishing pigs and lactating sow are producing relatively more heat than any other category of pig. A covered creep area in a farrowing pen conserves heat and the effect is that the temperature of the creep area is 6-8 C higher than the room temperature. This means that it is possible to maintain a lower temperature in the room in order to accommodate the sow as compared to a farrowing room with open heat pads.

Artificial heat
Artificial heat might be supplied via hot water pipes, such as delta-pipes and pipes with ribs placed below the air inlet, which means that the cold incoming air will be heated. This will prevent cold air currents in the animal zone. Heat is transferred to the air via radiation and convection. Delta pipes might be made of steel or aluminium. However, steel pipes are more efficient in providing heat due to a higher radiant emission rate. Local zone heating might be supplied via hot water pipes in the floor. Electric heaters or propane heater might also be used as artificial heat sources. Propane heaters are burning gas and will therefore produce water, which adds to the moisture load of the building. This means that ventilation rate and energy use is higher with this type of heat supply.

Summer ventilation
During the summer the temperature difference between inside and outside is low and animal heat production is just adding to the heat load of the building. This means that it is necessary to move a great amount of air through the building to remove excessive heat. Generally, it is not possible to maintain inside temperature less than 5 C higher than outside temperature unless cooling is applied. Cooling might be applied via cooling pads placed along the outside walls of the building. However, it will only be effective in climatic zones with low relative humidity during summer. In a dry hot climate like the interior of Spain the temperature might be reduced by 10-12 C by passing the ventilation air through an evaporative cooling pad, which is a cellulose pad that has water trickling through it. When the dry air enters the pad water is evaporated, which means that sensible heat is converted to latent heat in a so-called adiabatic process meaning that the process in itself is not requiring any energy. Another and more simple way of cooling the animals during the summer is via drip cooling, which is usually used in farrowing and gestation units. This system works by water that drips from a pipe onto the animal’s nose, which has many veins and therefore is quite efficient in removing heat from the body. Recently, high pressure cooling systems has been introduced as an alternative to evaporative cooling pads. This system works by spraying a mist of water in the room, which then evaporates and cools down the room. In a dry and hot climate it must be running continuously in order to reduce temperature and in that case relative humidity becomes too high.