Near the end of the summer of 2014, many problematic incidents about leg weakness in replacement gilts reached us. The problem occurred in different herds in Belgium, which each had similar complaints: gilts were purchased and were clinically healthy at arrival in the quarantine. After two weeks of quarantine, gilts started limping. Treatment with amoxycillins did not help, only treatment with high doses (10 mg/kg) of macrolides and spectinomycines brought a solution.

Three farrow-to-finish herds with approximately 300 sows in a three week batch production system were involved. Below you can find a description of the affected herds:

Hundred-twenty Danish gilts were purchased from a rearing unit in Belgium. They arrived from Denmark in Belgium at 20kg, stayed in quarantine stables in the rearing unit. When they reached 180-240 days of age they were transported to the herd. The gilts received an injection with tulathromycine upon arrival. They were fed a rearing diet ad lib and had continuous access to drinking water. They had a good body condition.

Between eight and ten days after arrival almost half of the gilts suddenly started limping. Only the hind limbs were affected, with discrete swelling of the joints. It seemed the gilts were in pain as gait alteration was observed.

Gilts were purchased from different breeding units in Denmark and were transported in a straight line to the herd. They were kept in quarantine during 15 weeks. The gilts were about 9 months old at first insemination. The animals were fed a rearing diet twice a day and had continuous access to drinking water. The gilts were supplemented with 50g mono calcium phosphate on a weekly basis until farrowing.

More than 80% of the gilts showed swelling of the joints, with variable degrees of lameness: going from simple leg lifting to adopting a "dog sitting" position.

Gilts were purchased from the same rearing unit as in Herd 1. They were fed a lactation diet ad lib and had continuous access to drinking water. Besides gilts, also finishing pigs showed limping in this particular herd. 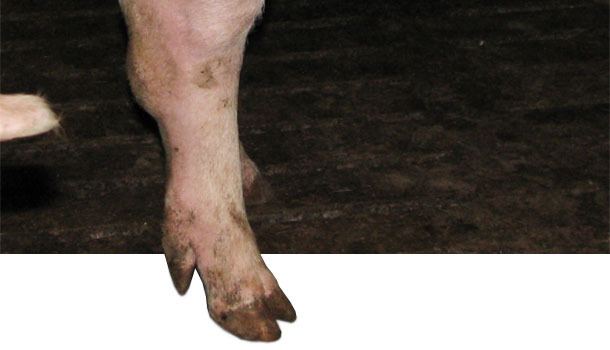 ► No remarkable deficits were discovered.

Table 1: Results of analyses of minerals in feed of three different herds.

► The number of sulphite-reducing Clostridia and the number of intestinal enterococci were too high. Therefore it was recommended to clean and disinfect the water pipes.

Table 2: Results of analysis of drinking water in quarantine in herd 2.

2. Serological analyses of the gilts for concentration of Ca and P (table 3).

In addition, CTx, which is a marker of bone mobilization, was too low in all herds. Because of the extra supplementation of Ca and P, it is not unlogical that CTx decreased. 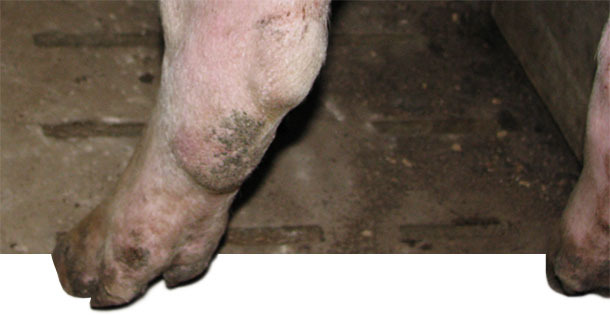 As gilts generally recover from their symptoms, it is not obvious to perform necropsy. Two gilts were euthanized to perform a necropsy. Both weighed about 100kg. The following observations were made:

Mycoplasmal arthritis does not cause major clinical problems in most herds. However, in certain herds, M. hyosynoviae can be a recurring problem, when bringing in new gilts.

Sows can be carriers of the pathogen in their tonsils and pharynx with intermitent shedding. They can transmit it to their piglets. However, the sows will also transmit maternal antibodies against Mycoplasma infection to their litter and these antibodies protect the piglets for up to twelve weeks. Although piglets will not develop clinical symptoms, colonization of the pathogen is possible during nursery.

Stress can cause the M. hyosynoviae to move from the tonsils and penetrate in the blood stream. From there, they lodge to their predilection site: the joints. Gilts, transported from the breeding or the rearing unit, experience stress because of the movements, but also because of the new housing environment and perhaps the new pen mates. It takes approximately one to two weeks for clinical arthritis to develop. M. hyosynoviae colonizes the synovial membrane in the joint, causing inflammation, resulting in pain and lameness and swelling of the joints.

Only treatment with high doses (10 mg/kg) of macrolides and spectinomycins showed improvement of the symptoms in these herds.

Therefore, preventive treatment with lincomycine was advised during ten days after arrival. Antibiotics need to penetrate into the joint fluid in sufficient concentrations to be effective. Also a supplemental injection with vitamins A, D3 and E was advised. Vitamin D is necessary to enable resorption of Ca from the gut. Curative treatment with NSAIDs in limping gilts was also advised.

Besides the supplementation of monocalciumphosphate, also chalk was supplemented in the herds, in order to not only increase the concentration of P, but also Ca.

Preventive measures mainly emphasise avoiding stress. Think of controlling the stocking density, the housing conditions (temperature, humidity, air quality, air flow, …), providing ad lib feed (instead of feeding twice a day in the quarantine period), … Obviously, also trauma to joints caused by feeders or during transport should be avoided. Nutritional imbalance and viral infections, such as PCV2 and PRRSv should be controlled as well.

This case presented an occurrence of M. hyosynoviae infections.

It seemed that the sows were carriers of M. hyosynoviae in the breeding units, transmitting the pathogen to their litters. Gilts, infected with M. hyosynoviae and probably carrying it in their tonsils, were exposed to stress during transportation to the herds. This caused a penetration in the blood stream, moving to the joints, resulting in discrete arthritis, swelling of the joints and pain, which resulted in limping gilts one to two weeks after arrival.

To avoid similar problems in the future, preventive treatment with antibiotics and vitamins upon arrival was recommended. Stress should be avoided and precaution needs to be taken considering nutritional imbalance.

Initially the problem seemed to occur only with purebred genetic lines, at a later stage also hybrid sows were affected. At this moment a herd with no purchase of external gilts, but own rearing also suffers from M. hyosynoviae arthritis. For this peculiar case, we tried to isolate the bacteria from the joints in order to prepare an autogenous vaccine. At the moment, no results are known yet.

Blastocystis sp.: Do we have to consider a new enteropathogen?26-Jan-2016 3 years 11 months 23 days ago
Erythema multiforme and respiratory disease in sows/gilts housed in group systems03-Nov-2015 4 years 2 months 15 days ago