Glässer's disease is still present in pig farms, and the importance of an accurate diagnosis becomes more important in the current scenario, which aims to reduce the use of antibiotics. This disease is caused by the bacterium Haemophilus parasuis which, after systemic infection of its only known host, the swine species, causes a fibrinous polyserositis. However, H. parasuis is not the only bacterium capable of producing this type of lesions in pigs, hence the importance of a differential diagnosis to identify the exact cause of the lesions and the disease. Identification of the causative agent allows implementation of preventive measures without the use of antibiotics —such as a vaccination program— or, if they need to be used, it allows for the choice of an antibiotic that is effective against the isolated strain. Prevalence of Glässer's disease is higher in nursery piglets, since they are subjected to high levels of stress due to recent weaning and adaptation to a new feed, transport and mixing with other animals.

The typical lesions of polyserositis in nursery piglets may be caused by different bacteria. Bacterial isolation from lesions is the best confirmation of their cause, and allows additional strain characterization tests, such as determination of virulence by PCR (Olvera et al., 2012) or sensitivity testing. Differential diagnosis should include mainly Streptococcus suis, but the role of Mycoplasma hyorhinis is also being questioned today. Some cases identified by veterinary surgeons as Glässer's disease turned out to be caused by Mycoplasma hyorhinis (Figure 1). Incorrect determination of H. parasuis as the causative agent based only on observation of clinical signs and polyserositis lesions can lead to prescription of ineffective antimicrobial therapy, often involving the use of several antimicrobials. Abuse of these therapeutic compounds causes dysbiosis in the animals, which become more vulnerable to secondary agents. Thus, inappropriate use of antibiotics does not only fail to meet therapeutic expectations, but it can also pose a risk to the animal's health.

Figure 1. Fibrinous polyserositis in a nursery piglet.  Haemophilus parasuis was not detected in the lesions, but  Mycoplasma hyorhinis was isolated from abdominal and pericardial fluid cultures.

Immunization implementation also needs a complete preliminary diagnosis, with correct identification and characterization of the causative agent. If a diagnosis of Glässer disease is reached based on polyserositis lesions, but these lesions are actually due to other bacteria, such as M. hyorhinis or S. suis, it is clear that vaccination against a H. parasuis will not help eradicate the disease from the farm. Laboratory identification of the causative agent should always be a compulsory step in the selection of the most accurate therapy and the most appropriate control of every disease. Moreover, given the variability of bacterial species such as H. parasuis, characterization of the strain that is causing the disease in each case can be of great importance. The recent development of PCR serotyping is a technological step forward that allows any diagnosis laboratory to determine the serotype of the isolated  H. parasuis strain (Figure 2; Howell et al., 2015). This technique solves the problem of shortage of laboratories capable of performing the serotyping of H. parasuis by classical serological techniques. Furthermore, this technique is an essential tool for immunization implementation, since the existing commercial vaccines provide serotype-dependent protection. 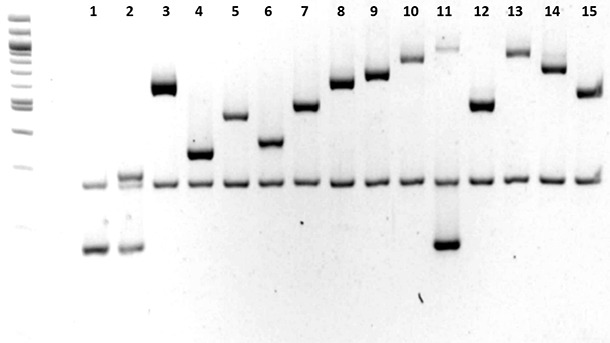 Agents that frequently cause polyserositis in nursery piglets are early colonizers of the upper respiratory tract of piglets. Dams are the source of these infections and their immune and infective status is essential for the maintenance of infection on the farm. In the case of H. parasuis, it is obvious that there are no virulent strains that can be isolated from healthy piglets. Colonization by these strains can protect them against subsequent infections with virulent strains (Brockmeier et al., 2013). These data support the use of artificial colonization of piglets with  well characterized non-virulent strains in order to control Glässer's disease. This is a strategy that deserves further study, as it would be a natural alternative to antibiotics.

Finally, the clinical outcome of  H. parasuis infections will heavily depend on the virulence of this bacterium strains, but also on the presence of other pathogens in the farm. Therefore, the occurrence of polyserositis associated with influenza or PRRS infections comes as no surprise. In the latter cases, it is advisable to control the primary agent, the virus, given that infection by it induces immunosuppression, facilitating secondary infection by bacteria, in this case H. parasuis.

To sum up, conducting a complete and accurate diagnosis is essential for the control of Glässer disease, which is facilitated by new technological developments that allow easy determination of the virulence and serotypes of H. parasuis strains.