After the banning of antibiotics as growth promoters, there was an increase in their total consumption due to the therapeutics treatments.

Total use of antibiotics in Denmark

Changes in the use of antibiotics in Denmark

Casal J. et al. (2007) carried out a study of the factors associated to the collective medications in the compound feed or the water.

Prophylactic use of antimicrobials (%) according to the number of components used

There is a real danger of an uncontrolled increase of the "more or less therapeutic" collective medications associated to various components, and unsustainable from a health and economic point of view.

There is always been a controversy between swine production, diseases and antimicrobial products because, on one hand, we must act against the diseases, but the management must be economically sustainable and give a good commercial image in front of the public health. 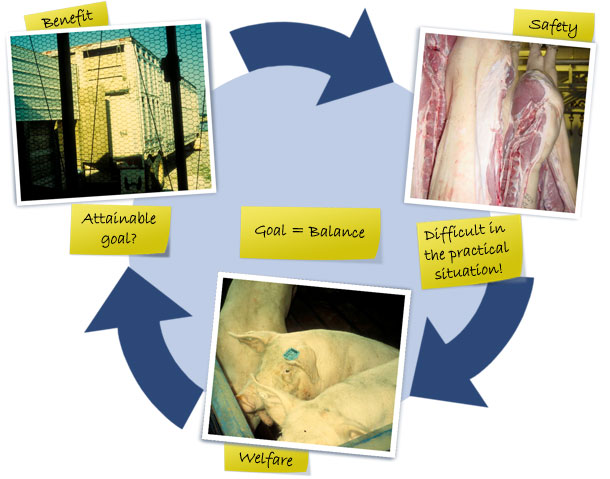 ... in the collective medications we treat ill as well as healthy pigs.

Is it worth to fight against EVERYTHING with antibiotics?

The big farms are more prone to treat whole rooms instead of doing it individually or pen by pen. This can contribute to create resistances.

We must set out the treatments from the point of view of the business, according to the price of the meat (investment) and the production cost (efficiency) in order to improve the competitivity.

Expenses in drugs (a) and total cost of the piglet (b) according to the stage in normal commercial conditions in Spain. 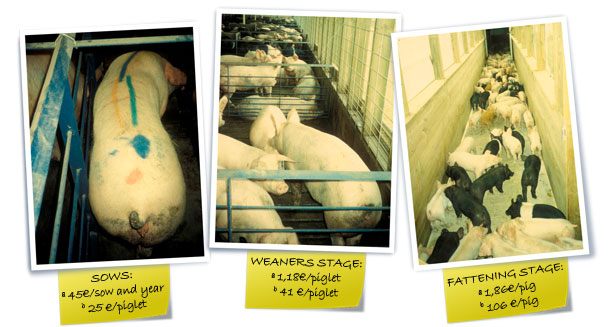 10 items for the efficient approach of medications in the water:

The goal is to incorporate an effective treatment bearing in mind the number of ill pigs and the probability of their detection for their treatment. We must estimate:

4 epidemic curves (Haemophilus parasuis) according to the therapy used.
Number of cases per day with an initial prevalence of a 0.5%

Establish disease outbreaks "predictors" in order to be ahead and justify the use of antibiotics according to the dynamics of the disease. Assess the effect of the transferability over the financial value of the option:

The transmission probability by means of the Effective Contact rate (ECR) is the key factor that influences the epidemic curve to respond with medication. If the frequency is low, we will have to choose the individual injectable treatment, and if it is high we will carry out a collective treatment in order to offer a better financial return. 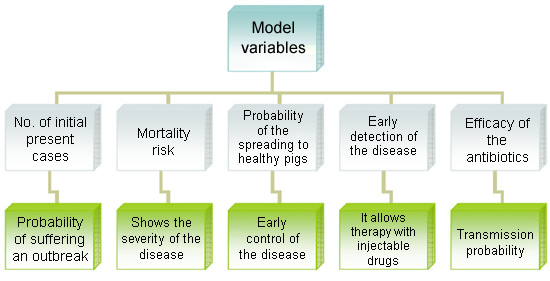 3. Rational use of antibiotics:

It does not consist of stopping using them, but to use them correctly. We must understand the pharmacokinetics of the antimicrobial drugs and relate them to the pharmacodynamic effect in order to attain a clinical recovery as well as a bacterial elimination. The integration of both will carry us towards an efficient medication.

Pharmacokynetics according to its administration (injection and oral through the water and the compound feed):

The antibiotics that depend on the time and the concentration are called co-dependent:

In pharmacodynamics we must know the sensitivity data of the most important pathogens against the antimicrobials.

Diameter of the inhibition area and MIC (Minimum Inhibitory Concentration) for tiamulin and A. pleuropneumoniae (Casals et al., 1990)

4. Quick return of the investment in medications.

Financial analyses are necessary in order to identify and monitor areas in which there is an opportunity cost, from the production system to the monthly monitoring of the drug consumption.

5. Correct sanitary management of the farm.

Improve health with actions at a global level (treatment, prophylaxis, biosafety, etc.) by means of a sanitary surveillance system carried out by a veterinarian in charge of it. Each farm must have its program and update it in order to adapt it to the real situation.

6. Financial evaluation of the problem: eradicate or control?

Favourite methods for the eradication depending on the disease

7. Seek the synergic effect when making antibiotics associations:
The nature, solubility and stability of the molecule is important (see chapters 1 and 7), but we must also bear in mind their action mechanism: bacteriostatic (they stop) or bactericide (they destroy). According to Jawetz's law, when mixing antibiotics there can be an "indifference" (sum of the action of both effects), "synergy" (the effect is higher than the sum of both antibiotics on their own) or "antagonism" (the effect is the inhibition of both). 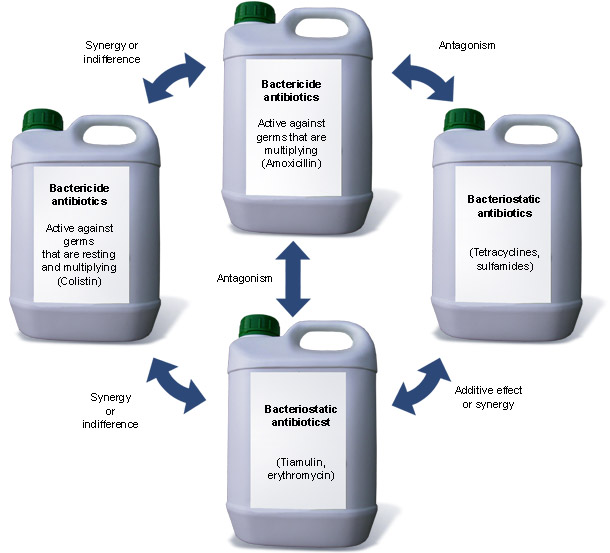 8. Savings not attributable to the medications or the preventative strategies:

9. Improvement of the farm in order to choose the best medication option (see chapter 6).

10. Strategic medications in the water:

Comparison between pulsatile, metaphylactic and continuous medication on the health and the performance of the fattening pig affected by endemic respiratory problems:

Both medication strategies improved the performance significatively in comparison with the controls without medication, but the pulsatile medication with the correct antimicrobials improves, also, the active immunity against the enzootic pneumonia.

Related products in the shop