Clostridium perfringens type A is part of the normal lower small intestine and colon microbiota of pigs and many other animal species. The diagnosis of C. perfringens type A has increased in neonatal piglet diarrhea cases in the last decade. However, the real importance of this bacterium as a primary agent of diarrhea in suckling piglets is not fully known. The main challenge for the correct interpretation of C. perfringens type A role in cases of neonatal diarrhea has been the complexity to reach a conclusive diagnosis. This aspect will be the focus of the present discussion.

The literature describes the clinical presentation of C. perfringens type A cases as piglets developing creamy or pasty diarrhea after two days of birth that could last for up to five days. Feces can sometimes become mucoid. Mortality is not usually observed, but affected animals tend to fallback comparing to unaffected peers, and consequently compromise the weaning weight. There is no remarkable finding indicative of C. perfringens type A at necropsy, what would possibly differentiate it from other possible enteropathogens found in this age animals. Histologically, superficial villous tip necrosis associated with fibrin accumulation might be present. This lesion associated with heavy colonization of bacillary bacterium in close association with injured enterocytes would favor C. perfringens type A diagnosis (Fig. 1). However, these findings are rarely seen. Most often, no microscopic lesion is observed, what raised the speculation that this bacterium infection might cause secretory diarrhea. This possibility was never confirmed. 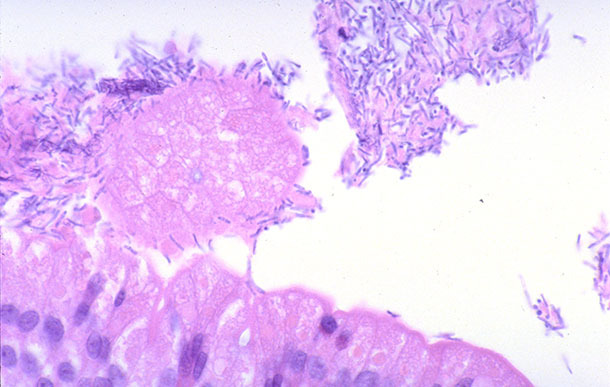 Gram stain, aspect of bacterium colonies and beta hemolysis in blood agar are the same among all C. perfringens types. The only way to differentiate the five types of C. perfringens, A to E, is based on the production of four major toxins: alpha, beta, epsilon and iota. There are also other two important toxins, enterotoxin and beta 2, that have to be mentioned. All types of C. perfringens can be found in piglet gastrointestinal tract, but only types A and C are considered pathogenic for this age of pigs. There is a very high correlation between the detection of the coding genes of these toxins, cpa, cpb, etx, ia, cpe and cpb2 (Tab. 1) respectively, and their expression, meaning that the PCR detection of these genes would represent the same as the detection of the toxin in the feces. All C. perfringens types have the cpa gene. The detection of cpa and cpb would defined the bacteria as type C, while the detection only of cpa would define the bacteria as type A.

Table 1. Definition of the Clostridium perfringens types based on the production of toxins

As C. perfringens type A is part of the normal intestinal microbiota of piglets, for many years, the production of beta 2 toxin or the presence of the cpb2 gene by some C. perfringens type A strains thought to be the definitive marker for pathogenicity. As a result, the definitive laboratory diagnosis was based on the detection of beta 2 toxin in fecal material by ELISA or isolation of the agent and typification of the colonies by a multiplex PCR for the presence of cpa and cpb2 genes. However, at least three different studies, including one from our group, have shown that multiplex PCR testing on C. perfringens colonies isolated from diarrheic and normal piglets detected more cpb2 positive C. perfringens type A obtained from normal than sick piglets. Unfortunately, these findings clearly demonstrate there is no specific assay available that can detect or identify pathogenic strains of C. perfringens type A. I truly believe some strains of this bacterium are pathogenic for piglets and can cause diarrhea and reduced growth rate; however, we do not know yet how to identify them! Of course, this condition imposes a tremendous challenge for controlling the disease, as the final diagnosis is based only on the “last possible agent remain for testing”. Much more work has to be done in order to define a possible marker for pathogenicity of C. perfringens type A.

This area is not intended to be a place to consult authors about their articles, but rather a place for open discussion among pig333.com users.
27-Oct-2015

Ib Borup PedersenThe reason that C. perfringens type A, is a bigger problem in herds today, is ONE REASON alone. I have for 3 years fed my sows on NON-GM soya, and no sprayed down grains. and we have not seen this diarrhoea AT ALL for this period. we tryed to use GMO soy for a week again, and the diarrhoea returned straight oway. The explanation is that Roundup-Residues in the feed, Glyphosate ( A patented antibiotic)is sufficient in the feed to upset the ballance of the gut microflora, Coli, Clostridies, streptocokkus etc, are seveal hundred times more tolerant to Glyphosate than lactic acid bacteries and other good not pathogene bacteries. The University of Århus has looked into my findings and have made this rapport: http://goo.gl/D4P2KS
There is lots more on the Glyphosate front, I also found it to make Deformed offspring, raising vith dose, and fewer pigs born pr litter when higher levels of glyphosate in the food. it is all in this link: http://goo.gl/wUXTus
and see this film: http://goo.gl/jHxJsf
Ib Borup Pedersen
Leave a new Comment