The question of expansion of the US breeding herd is probably the hottest topic around and seemingly on every US producer’s mind. There are predictions coming in from everywhere, genetics suppliers, lenders, builders and input salespeople and almost to the one, they see a moderate to large expansion either setting up or underway. There have been numerous reports of increased activity, which often generate local opposition and then some headlines which increase visibility. People are trying to find new sow production in non-PEDv affected units or areas.

In addition, there is increased activity offering fixed priced contracts for weaned pig production units. These are sow farms which produce weaned pigs for a fixed price year round, which reduces price risk but can cause some problems for the pig producers if their costs rise, or production sags due to disease or poor management. There is some increased business risk too, as some of these operations have been known to fail when weaned pig prices get very low and contracted buyers face a large differential between the contract price and market price. Sometimes it gets a little too tempting to buy $11 weaned pigs from the open market when you have contracted for $40+ and are losing $30 per head on the finished animal as a result. Lenders seem to love them though as long as the underlying contractor is strong. 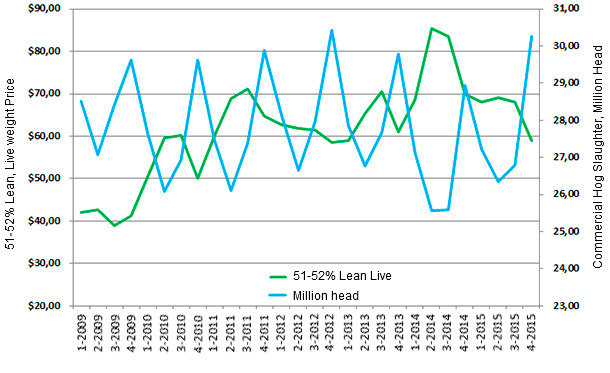 Figure 1 shows the quarterly slaughter numbers for commercial hogs in the US. The numbers are actual USDA data through the first quarter of 2014 and then represent forecasts through 2015 by Ron Plain, a former colleague and well-known hog price analyst from the University of Missouri. You can see the typical and regular seasonal production pattern very clearly. The peak slaughter around this time of year and the low points in the summer months repeats just like clockwork every year. Focus if you can on the underlying movement of that pattern across the page and you will see that an expansion was underway until PEDv took the wind out of everyone’s sales. That appears to be ending and normal productivity is beginning to set up again at the aggregated national level at least.

A quick look at sow productivity numbers across all farm sizes monitored by USDA reveals that regardless of farm size, by February of 2014, national pigs per sow had retracted to the level of five years ago but by the time of the reporting of the September 2014 quarterly Hogs and Pigs Report by USDA, productivity was essentially completely restored though had not advanced the typical tenth of a pig or so expected for 2014. The next report just before Christmas will probably reveal full pigs per sow productivity restored across all size units. We know the pipeline of production is not quite restored to full inventory but the farrowing intentions we reported from two months ago were much larger than trade estimate expectations going into the early months of 2015. 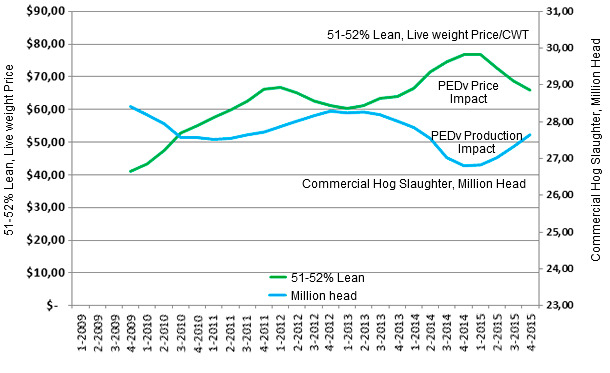 Figure 2. One Year Moving Average Chart of US Commercial Hog Slaughter and 51-52% Lean Live Weight Prices per CWT
by Quarter (2009 through 2015*). Source: Ron Plain, University of Missouri and USDA
*Forecasts from 2nd Q 2014 through 2015

Another way to look at data which has a lot of repetitive patterns or “noise” in it (like Figure 1) is to form a moving average. The data in Figure 1 are presented as a moving average of the previous four quarters (one year) in Figure 2. With the moving average chart you can see the trend which all the spikes in the monthly data obscure. You just have to remember that the moving average line will be a little behind what is happening now as it takes time for the current information to work its way into the average and then turn it in the current direction. What you clearly see in Figure 2 is the price response to the decreased marketing from PEDv and the reemerging full productivity, which is almost back to the baseline before PEDv hit in the moving average. This indicates it is now beyond that point in the current slaughter numbers.

Last time we showed that the Hog/Corn ratio was also flashing an expansion signal for the first time since 2005-06 when profits were very good due to expanding exports and corn prices had not been affected by demand from ethanol distillers yet. The outlook on corn demand is still relatively bearish but can change very quickly. We have had a big worldwide record harvest and the normally upward tracking demand for corn settled into a flat line with the record low beef production and reduced numbers of hogs being produced. Markedly increased slaughter weights though for both species has led to a mitigation of the demand problem that would have occurred had the weights held to previous years patterns.

Another impact is the dramatically falling crude oil prices which has a number of interesting effects on corn prices. First, when gasoline prices fall, there is less demand for the cheaper ethanol to blend into gasoline since it is not equivalent in energy compared to gas and will typically not be much cheaper than gas in these times. In countries where taxes are not the vast majority of the gasoline prices, the incentive to use ethanol to lower cost is reduced. However, in many developed countries ethanol blends are mandated and are therefore not really very price responsive, but there are still some mechanisms to adjust use as price changes so demand may fall slightly. This could put a damper on corn demand over time, at least to produce ethanol exports from the US.

Falling oil prices have some counter-balancing effects that are hard to predict very accurately. In general, falling crude oil prices tends to strengthen the US dollar against many other currencies since it portends economic expansion (US economy is relatively energy intensive making this key input cheap) and the attractiveness of alternative investments in commodities, which has gradually happened since there has been low returns in traditional investments due to Central Bank liquidity policies, tends to reverse, leading people to sell the now more uninteresting commodity investments and put money back into economic growth investments. All of these things make the dollar stronger but can perversely dampen pork and corn exports. We will have to welcome the New Year to see what happens for sure. To everyone reading, I convey my wish for you and your family to enjoy a wonderful Christmas time and may profits be your present in Europe for 2015 and not disappear too quickly in the US!