Since the late 1880’s, nearly everyone in the United States has consulted a big, hairy rodent (popularly, a groundhog but for you precision thinkers, a marmota monax) each year on February 2, to determine if the winter weather will subside quickly in the coming months or linger longer than expected. This national ritual takes place on Gobbler’s Knob in Punxsutawney, Pennsylvania and everyone is watching via the national news networks. If the groundhog sees its shadow (a sunny day) the forecast is six more weeks of winter weather. If it is cloudy and no shadow is observed, an early break in spring weather is eagerly anticipated. Unfortunately, it looks like the ground hog of pork price forecasts saw a long shadow when it emerged in late February and the tiny bubble of hope that the already late-to-end seasonal lows of winter were over was put on hold.

We have discussed the pork seasonal price patterns in some detail in these columns and it remains a fairly good predictor of the big price turns that are built into an annual price cycle, primarily by Mother Nature. These are related to day-length which affects both the fertility in sows (seasonal anestrus) and the potency of many boars in the resulting heat of late summer. This makes the January farrowings lower than the annual monthly average in the Northern Hemisphere (opposite down South).

Even though there is a big growth spurt in the wean-to-finish phase as the spring weather comes on, it is dramatically slowed in the heat of summer making an already smaller annualized population have to stay longer in the buildings to reach market weights and thereby starving packer lines a bit further bumping up summer high prices.

All of this is supposed to work the opposite way in December/January, where the trough of low prices resulting from ideal breeding conditions in the previous spring, induced by lengthening day-length added to the big growth boosts from cooler fall temperatures and that luscious new crop corn, all conspire to drive lots of heavy pigs to market, well above the annualized average by the month of December. Throw in reduced slaughter during the November-December holidays and an abundance of pigs push market prices to annual lows in December. The problem is, this is all supposed to be over in early to mid-January. Not so this year for a variety of reasons.

Market forecasters, who are well versed in using seasonal patterns to make their guesses, also know that the hog cycle is working its way through the seasonal pattern on a longer orbit of 3-4 years. The cycle price pattern historically was induced by the price-driven expansion of herds when prices were high for a sustained time, followed by the low-price-driven contraction of production as overproduction set in and hammered prices. Many people forget that these two repeating patterns can clash from time to time which mitigates their effects (one pushing prices up and one pushing prices down at the same time) or they may coincide, which can sometimes dramatically accentuate the movement carried in each one individually. We have a case of this happening now, which only occurs every few decades. Mix in the seasonal consumption patterns for a fuller picture but we’ll tackle that one more fully in a coming month. 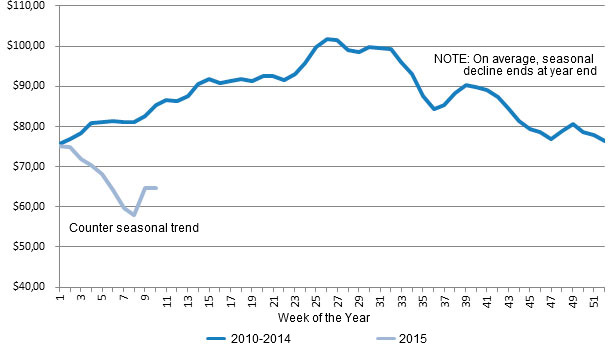 The slowing of new PEDv cases and the resulting bounce-back of production (mimics herd expansion of the cycle effect), coupled with the nascent expansion and the lingering heavy market weights that producers fell in love with at the height of the PEDv crisis, have all pushed market hog prices steadily down throughout the month of January and almost all of February, a remarkable thing (See Figure 1). Of course this has also been affected by the global exchange rates making US pork look a bit expensive to the big importing countries and a slowdown at the ports in California by union workers to induce higher wages which has helped to push inventory stocks up quite a bit.

I have been watching our friends in the weaner/feeder pig market for their forecast (which comes to us in the price they are willing to bid for the small pigs ready for sale in the summer markets). Apparently they have been watching the pork groundhog too, and while they emerged in late February on a buying spree, they saw the light so to speak, and have hunkered down in watch-and-wait mode as the shadow of negative returns appeared longer than usual.