Just like the emergent molten lava from Mount Kilauea, which has smoldered underground for years, creeps ever closer with destructive power to homes in the Village of Pahoa, so an historical metric of the US hog industry, having lay dormant for many years, is creeping ever so slowly over its profit destroying “trigger” level. That metric is the hog corn ratio. The hog corn ratio is calculated as the live hog price per hundredweight divided by the price for corn per bushel. As of July of this year, the ratio had reached or exceeded the value,which for over 100 years, has been associated with expansion in the US pork production industry. That value is 20. The combination of low input costs and high sales prices produces profits and those profits, when they are sustained, can be the societal signal for a firm to expand production. Profits are the reward for taking scarce global resources from other people’s potential use and generating value exceeding the cost of using those resources.

The last time the hog corn ratio exceeded 20 was in September 2006, one month before emerging demand for corn by ethanol distillers in the United States reached a tipping point which drove corn prices on a dizzying upward trajectory. That rise has only been mitigated by an all-time record worldwide corn production season this year coupled slack demand because of both the destruction of nearly 10% of the US pork production due to PEDv and a record low US beef cattle inventory matching numbers from the 1950s.

The ratio can reach 20 with help from low costs (corn) or from escalating revenues(hog prices) but profits are the key in driving the ratio rather than either cost or revenue in isolation. The important thing to note is adding just a $1.00 to the average price of corn per bushel means a required corresponding increase of $20 per hundredweight in the hog price just to keep the ratio at the same value. Corn prices rose five dollars per bushel from 2006 through the drought-caused peak average corn price in August 2012(just prior to harvest) and getting an additional $100 per hundredweight in the hog prices took some time. 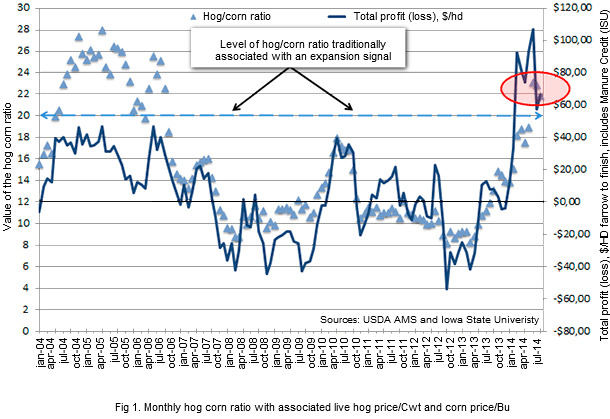 In Figure 1, we trace out the hog corn ratio (blue triangles) relative to monthly farrow-to-finish net returns (dark blue line) for pork production published by the Extension Service at Iowa State University. The series, not without some controversy, is still a reasonable proxy for US average cost of production and net returns when you keep in mind that almost no single firm has the average cost of production and market price at any one time. You will notice that while there is a strong correlation of the ratio with net returns, it does not always signal expansion when hog producers are profitable, they must be very profitable. The key to triggering the metric to the level of the expansion signal is to achieve high profitability in the presence of relatively low corn prices, but such corn prices have been a thing of the past since 2006. The range over which hog prices historically travel requires the achievement of the expand signal with low corn prices as the required 20 times multiple for hog prices will otherwise push needed live hog prices out of reality range.

For those producers who have a cost and price structure like the Iowa figures, profitability has only really been experienced since January of this year but those profits have been astronomical. Not every producer received these profits as many locked in lower profit margins with hedges in the months preceding these historical profit levels. At the time those profits were locked in through hedges, they seemed very good, (probably in the range of $30-$40/head), but who could have anticipated actual profits exceeding $100/head last spring? I never fault producers who lock in such margins in advance as to complain about it after the fact is like buying life insurance and then being upset that you haven’t died yet to recover the cost.

Nevertheless, if you were one of the producers who escaped the full impact of PEDv and did not hedge in lower outcomes, the accumulation of wealth has been astounding. Pork producers get the expansion itch when their bank account begins to swell.Recent information from the largest lender to hog producers in the United States suggests profits received over the last year have been used to retire working capital debt as well as some long term notes. The resulting current debt levels held by producers could easily support the acquisition of additional assets. Fuel, oxygen and a spark! and now, the hog corn ratio warns that an expansion, which could come bubbling out of the smoldering earth at any time, might burn down all the profits of the last year.