Everyone in the United States is waiting with a sense of fearful expectation about the return of the seasonal pattern and the prospect of prices breaking out of this painfully extended period of flat-lining which has gone on for almost two months now. The spring normally features a two part price advance over the lows of December. This two part push up in prices is led by hams bought in advance of the Easter season in order to process for the holiday and then the belly, especially the ribs, which signals the onset of the BBQ season. There is a lot of pent up demand for BBQing after the long winter so we often see this demand begin well before the average daily temperatures are consistently warm. So far, there are little hints of these seasonals but they are occurring as we ride down a cyclical wave of restored production from the end of PEDv and it is dominating everything. The carcass breakout prices show primal ribs making a move up now as expected but it is not enough yet to carry the carcass up. 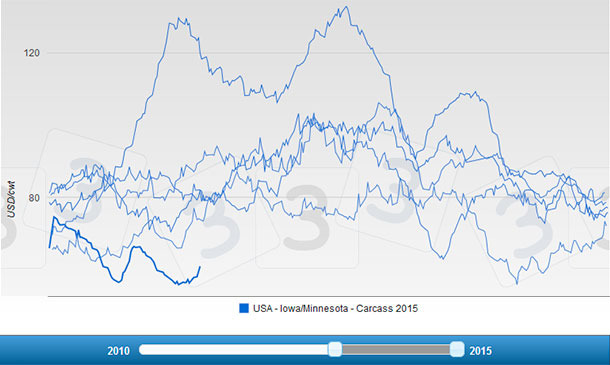 By this time of the year, we should be seeing the very beginning of the seasonal down tick in production from seasonal infertility last fall. That effect is likewise being snuffed out by the return of pigs lost last year to the famous virus. That seasonal reduction in numbers should continue into the early to mid-summer and then the double bang boost from slow growth due to heat further pumps the prices up to their yearly highs. We saw this last year. Producers were able to keep weights at historically high levels though the decline was relatively normal during the summer (it just started from a record average carcass weight). Weights continue to be historically high and annual production continues to run in the 6.5-7.0% above last year range.

The recent run up of the dollar is giving pause to buyers on the world market. The price of the individual primals, except for the ribs are lackluster at best suggesting that exporting is not taking place at a brisk rate yet. Food stores in the US Midwest are regularly featuring the entire boneless pork loin (9-12lbs) for $14-$17, which is the mark of the price doldrums.

As we look out over the horizon for signs of hope, there is much talk about the Chinese liquidation of breeding stock due to the fact that the Chinese grain producers are getting their turn at artificially pumped up prices and feed costs are too high. The hope is that this will force large increases in pork purchases from export markets to make up the shortfall eventually.

Some things to keep in mind about such hopes start with how liquidations progress. Not everyone decides to liquidate at the same time, which extends the period of selling of productive stock over a long period. As this happens, there is still several months of production in the pipeline which weighs on the market for an extended period. As the sow meat hits the market, further reductions in price take place and continue over the period of the staged liquidation. In the end, the down side on price from liquidations lasts much longer than people who pencil things out expect.

In addition, the buying pattern of pork by Chinese citizens is changing as the new middle class has emerged. Typically there is less adherence to traditional consumption patterns sometimes even during holidays and much more flexibility in diet to move between proteins due to rising incomes and income stabilization (urban employment vs. rural employment or farming). At the present time, Chinese pork prices are still falling. Lastly, don’t expect the Chinese to come out hat-in-hand looking for pork in the world market at any price. They are shrewd purchasers and you will rarely find them looking vulnerable even when they are.

Futures prices are slowly rising but we are seeing many daily closing prices at the bottom of the day’s trading range, especially recently. We awaken to hope every morning but reality tucks us in at night.