Two big things are happening in the US. First, the long night appears to be over and the dawn of the summer seasonal is well on its way causing profitability to return. Cash prices have improved dramatically since mid-February levels and while the flood of hogs continues at a pace much higher than last year, the low price beating has taken up to 10 pounds per head off of open market hog weights while those which are contracted are down about seven or eight pounds per head live. Contracted hogs sometimes have price incentives beyond the base market price which can make them less responsive to weight change as open market prices fluctuate. Weights are that other “knob” that producers can seize to tune in a more favorable price when the number of animals in the pipeline is pretty much fixed, on their way and burdensome in number. 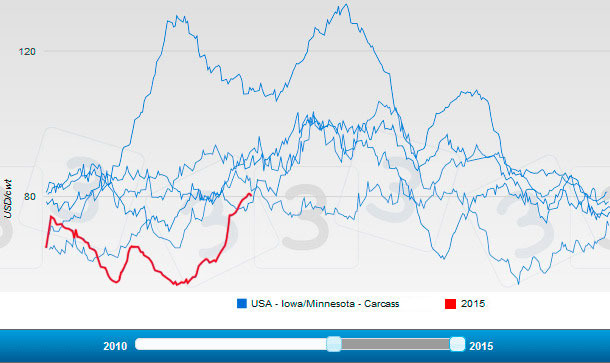 Interestingly, as current finished hog prices broke free and started up, weaned pig prices initially shot up against their seasonal pattern in April (which is normally starting to suffer from anticipated late fall sales dates for current weaned pig purchases). However, finished market prices were so depressed since February, weaned pig prices were likewise pushed down to near their cost of production during a time when they would normally be on the rise. After a few weeks of counter-seasonal rise, weaned pig prices have caught up to the normal seasonal trend line and have paused before likely beginning their normal descent. As the tide of market hog prices rose in April, all boats floated higher.

The other big news in the United States is Seaboard and Triumph Foods announce plans to build and operate a large-scale packing plant in Sioux City, Iowa. Planned scale is three million head per year which puts daily kill in the 10.5-11,000 head plus range depending on holiday operations and initial availability of supply etc. We're a long way from the first hogs being slaughtered and the kill line being filled on this new plant but it seems likely that export growth will not accommodate this many new pigs so some older slaughter facilities will likely retire. Which ones is anyone’s guess. It’s not always the oldest which are the most vulnerable. Supply assurance (the long term economic availability of pigs to kill that match the quality requirements of final demand) and long-term suitability of the current site (which changes as neighborhoods change) can put pressure on plants to consider retirement even when they are otherwise profitable.

One of the things which this move signals is the further coordination of the production sector with consumer demand as these close associations and partnerships essentially produce a farm-to-consumer integrated chain. It was only about two decades ago that packers in the United States began to overtly pay for hogs based on their quality. Prior to that, hogs were simply paid on their live weight, the same way they are in many places around the globe today. This live-weight-only payment scheme has always been a little bit of a misnomer since the buyer typically knew the quality of the hogs purchased on the live weight basis as the plant got to see and measure the results after slaughter. Producers with better hogs would be paid more next time, if they had opportunity to go elsewhere to sell them, once the desirable nature of their offerings were well documented.

Typically the information obtained from the carcass after slaughter, while used to formulate the next bid to the producer, was not shared directly with them, rather it was considered part of the competitive advantage of the packer. The big problem (among many) with such a system is that unclear signals are sent back-chain via the price bid. Investment by the producer in valuable traits is typically much less than what it would be if specific characteristics were either rewarded or penalized explicitly or transparently in the pricing mechanism. So called “hide-the-ball” pricing produces underinvestment in valuable traits desired by the consumer and creates a kind of dead-weight loss (to the producer, the packer and the consumer) that price transparency tends to fix. Hence the movement to ever more coordination and integration in livestock production.

Integrated firms that can “see” all the costs and returns transparently across their production, processing and marketing phases (since they own each phase), have a unique opportunity to bring extra value far faster and at less cost (more efficiently). In addition, the changes can be prioritized around that subset of possible improvements offering the biggest return to investment, the improvements consumers want the most and are therefore willing to pay the most for result.

Legal restrictions regarding market power and monopoly aim to prevent single firms or too small a number of large firms from integrating and then using these advantages to put all their competitors out of business. Once monopoly has been established, the resulting pricing often reverts to a situation as damaging to further improvement in whole chain wealth creation as the “hide-the-ball” methods.

Because of legal and societal problems with monopoly, and many other reasons such as the tremendous capital required for a whole-chain purchase or investment, as well as the diversity of expertise and its allocation across firms in the vertical chain, quasi-integrated coordination has developed. This latest packing plant announcement is an example. Closely cooperating partnerships with some co-owned assets to maximize current and future value through rapidly and nimbly responding to evolving consumer demands with tremendous scale. What can possibly go wrong? Pretty much everything. More on that in the months ahead.